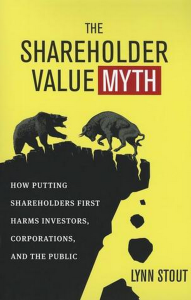 At at fast 115 pages, you can read this book in a sitting. Looking back, it would make more sense for a beginner to read this and then Firm Commitment (the last entry). Professor Lynn Stout’s view here seems to be that what’s actually in shareholders’ interest is different than what we typically think of and we actually harm them through the current conceptualization of what is in their interest (i.e. “maximization of stock value”). In short, they’re people with lots of different interests that include more than just stock-price maximization. So, we should expand our understanding of what “shareholder value” means, if we are going to actually benefit them.

Another oddity — “Goldman Sachs investment bankers and Morgan Stanley traders can easily take their skills and their client relationships to other banks, and often do, and at least in the United States, any attempt to stop them would run afoul of the U.S. Constitution’s Thirteenth Amendment.” (pp. 84-85).  I don’t know if she’s trying to suggest non-competes are unconstitutional?

Anyway, a nice intro read (also a plus are the helpful footnotes) but at least for purposes of this project she takes as a premise that shareholder value can be the lodestar, it’s just we need a robuster version of it.